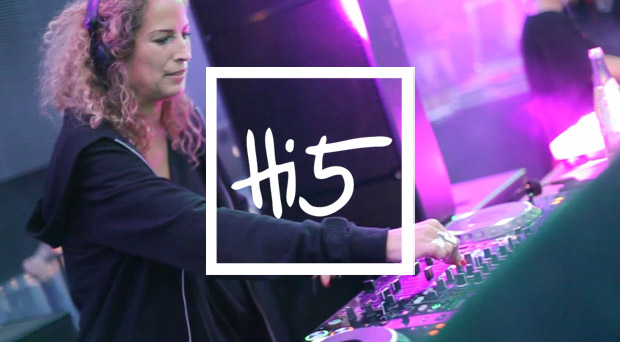 This time our Hi5 consists of a voice record and a gorgeous picture of our interview guest Monika Kruse! She’s a great DJ & Producer for over 25 years already and also the label owner of Terminal M Records. A few weeks ago we met her at the Echelon Festival in Bad Aibling and today we had the pleasure of having an interview with her via phone.

Here are our Hi5 questions:

You are almost resident at the Echelon Festival, which is close to Munich, where you grew up. How did it feel for you playing there?

Oh well, it’s always good fun because this festival has always nice artists which are friends of mine, like Karotte and Pele & Shawnecy which are my label mates and they organized this festival as well. So it’s always a „Big hello“ if I meet all this guys there and hanging out with each other. The first time I played for Echelon with Karotte and Marek Hemmann, we decided after the festival to go to the Chiemsee for a light swimming. I mean of course nobody had a swimming suit and swim wear with them, but we didn’t care and just jumped into the lake, naked, and we had a good laugh. So Echelon is always good fun (laughing)!

Ibiza, France, Croatia. You are traveling a lot. How has your year been so far?

My year has been super nice! Great gigs so far and production-wise there are some successes as well with some releases of mine. I am really happy about it!

And you also played at the Ultra Music Festival, right?

Yeah, I played for them in Argentina and Miami and now I gonna play for them in Chile. I am really looking forward to it.

DJ Hell, Sven Väth, you all kind of established the German House and Techno Scene. How do you think, did the scene change in the meantime?

Well, you know, after 30 years of electronic music, there have been a lot of changes right now, e. g. not only new music stuff, like EDM or Dubstep, but also like what people expect when they go out. I mean nowadays a lot of nights or events are about the entertainment and maybe not so much about music any more. Some DJ’s they cannot even mix, but their floor charge to peoples face and they like it. But I think it’s their choice of what makes them happy and it’s all about entertainment and having fun. Music is about cheering you up however which kind of music it is and so I don’t judge anybody. But for me: I am old school, I still prefer techno and house without this superstar-DJ-thing, which is now happening. I like it when it’s more underground.

In the 90ies you started organizing more or less illegal parties in Munich. What do you think about the clubs in Germany today and what are your favourite ones?

My favorite one is Berghain/PanoramaBar, I play there 3-4 times a year, I am kind of a resident there. For me that’s my living room. It’s a small, most outstanding club in the world. Besides that I think we have a good scene. Munich is pretty good. I’m a litte bit sad about what’s happening with Frankfurt. It’s a little bit suffering with the club scene right now. Which is sad, because it was one of the cities where techno exploted back in the 90ies. Well, yeah, I mean I love cities which have good clubs and I still get sometimes surprised in a good way when I play where I never played before, like „wow, this is a really cool club“ So I’m happy in Germany (laughing).

January is obviously your recovery & detox time. What are your plans for the upcoming months?

I go to South America, Chile and for the first time to Peru, I am really happy about that. And then a big Asia-tour in November. In December some festivals, some club-gigs and then back to South America. And then January: off, off, off, off (laughing). I need that, to get grounded, going to bed early, waking up and doing yoga and meditation. If I travel so much and don’t get enough sleep, after a while my body is exhausted. So January for me is the time to get back my energy and looking forward to the rest of the year. And for me I really need to make a break and see something else than only party (laughing).

Thank you so much for your interest and it was lovely to meet you at the Echelon!